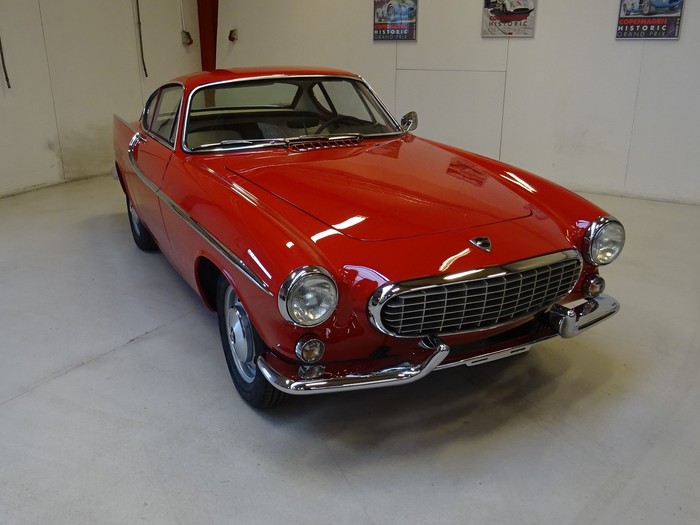 Fully restored original early production Jensen build Volvo P1800 with the original 4-cylinder engine and 4-speed manual transmission with overdrive. The Jensen models (first 6000) have some unique features that were discontinued after 6000 was produced. The car is most famous for its uniquely styled interior and retains its correct bullhorn bumpers, egg-crate grille, license plate light, front white parking lights, C pillar badges, fresh air grill, as well as all its factory chrome. A full restoration and inspection show no evidence of the car ever being in an accident.

Volvo was best known for making sturdy but somewhat stodgy sedans in the PV544 and the 122 Amazon mold. In the 1950s, Volvo flirted with a sports car with the fiberglass P1900, but the quality was miserable, as were the car's driving dynamics. Volvo took another stab at a sporty car with the P1800 in 1961.

The design of the car was until very recently attributed to Frua of Italy. Still, in reality, it was a family affair, done primarily by a then-young Pelle Pettersen, the son of 544 designer Helmer Pettersen. The car at least looked Italian, very much a product of the 1950s rather than the 1960s with neat tail fins and a short greenhouse with a tall beltline. Jensen assembled early cars in West Bromwich, England.

However, the quality of the Jensen-built cars was not up to Volvo’s standards (and the cars were notoriously rust-prone), so production was shifted to Volvo’s Gothenburg plant in Sweden in 1963, and the model name transitioned from P1800 to 1800S. A few years later, in 1969, the original 1.8-liter B18 engine was replaced with the 2.0-liter B20 for an added 18 hp. Both engines came with dual, English-made SU carburetors. In 1970, the 1800E came with a host of changes, including a new instrument panel.

Today, parts support for the Volvo 1800 remains good, and several specialists are available to take good care of owners.