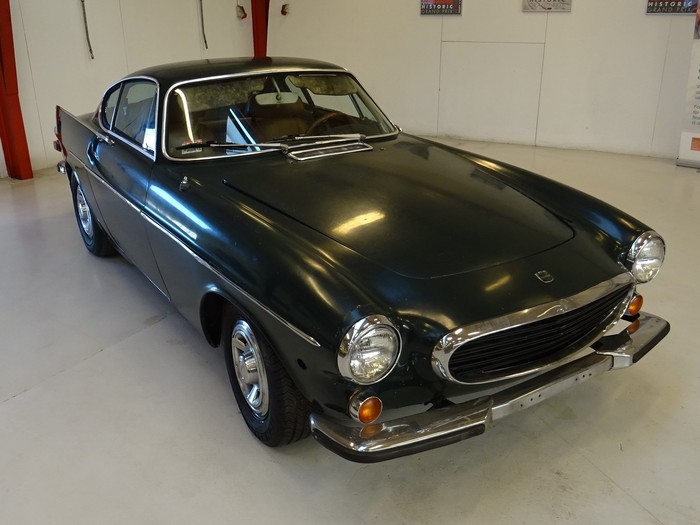 This 1971 Volvo P1800 E is in original mechanical and cosmetic condition, except for the wheels and an exterior color change from Volvo color code 105 (Gold Metallic) to Volvo color code 94 (Dark Green), both colors offered for the 1971 model year. The car retains its original beige/brown leather interior, Volvo upholstery color code 341-766, only offered for the 1971 model year. The seats are in excellent condition for a car this vintage. The car retains its original Volvo 4-cylinder Bosch D-Jetronic fuel-injected 2.0-liter B20F engine making 130hp, as well as its original 4-speed manual transmission.

The car is complete and will start and run, but will need a new fuel pump eventually. The car will need some restoration and attention before it is ready for the road after coming out of long-term storage.

The car has a clear and free Tennessee, USA title, and EU customs, and tax has been paid. A detailed inspection shows no evidence of the car ever being in an accident.

Volvo was best known for making sturdy but somewhat stodgy sedans in the mold of the PV544 and the 122 Amazon. In the 1950s, Volvo flirted with a sports car with the fiberglass P1900, but the quality was miserable, as were the driving dynamics of the car. Volvo took another stab at a sporty car with the P1800 in 1961.

Design of the car was until very recently attributed to Frua of Italy, but in reality, it was a family affair, done primarily by a then-young Pelle Pettersen, the son of 544 designer Helmer Pettersen. The car at least looked Italian, very much a product of the 1950s rather than the 1960s with neat tail fins and a short greenhouse with a tall beltline. Jensen assembled early cars in West Bromwich, England.