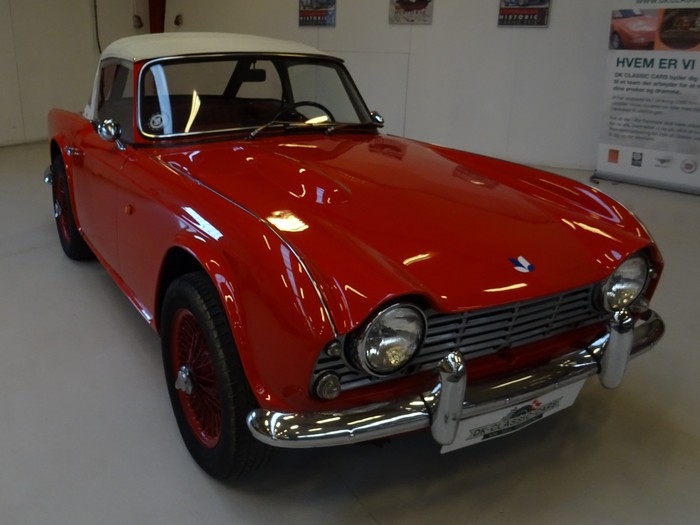 The car was restored in 2010 and 2018 under the commission of the previous long-term Danish owner. Restoration in 2010 included new paint, new interior, new brakes system, differential, and new steering column and in 2018 the engine was rebuilt, including new pistons, cylinder, manifold, and starter. The car has been inspected and fully serviced and can be enjoyed as-is for many years to come. The car has Danish title and registration and is coming out of 10-year Danish ownership.

Building off of the TR3's success, Triumph unveiled the TR4 in 1961. Furthering the evolution of the earlier model, the TR4 combined a low cost of entry with a capable open-top sports car to become one of Triumph's best-loved cars.

Stylistically, the TR4 was quite a departure from the TR3. Gone were the low-cut doors and polarizing grille of its predecessor, and in their place was a more modern design courtesy of Giovanni Michelotti. A spacious trunk, high beltline, full-sized doors with roll-up windows, and a revised front look brought the company into a new era.

Mechanically, the car possessed the same 105-hp, 2138 cc, inline four-cylinder engine that was offered during the TR3's later iterations, though buyers who were looking race their Triumph in two-liter classes could opt for the 1991 cc mill. The TR4's chassis was initially the same as its predecessor, though the track was wider and steering was through a rack and pinion set-up.

In all, just over 40,000 TR4s left the Coventry factory. And like most British roadsters of the era, the lion's share landed in the USA. Their relative affordability, good handling, and brisk performance made them a popular choice on the track, and they continue to be an entertaining drive today.