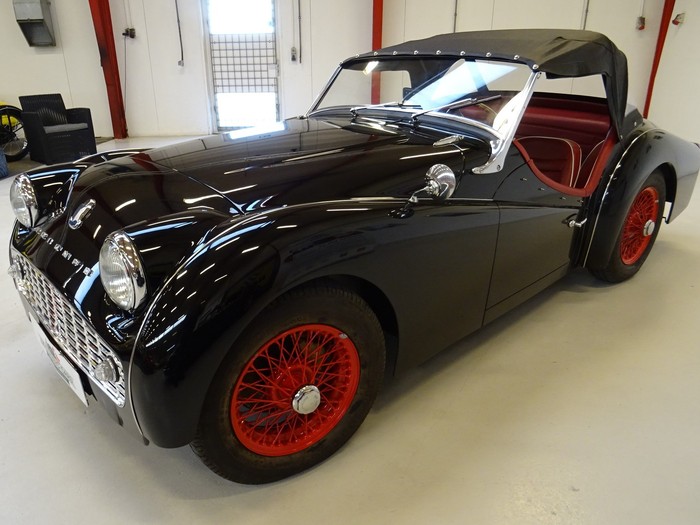 Wonderfully restored Triumph TR3A roadster in great mechanical and cosmetic condition and with only 98476 miles on the odometer. The car retains its original 2-liter inline 4 engine making 100 brake horsepower and a 4-speed manual transmission with overdrive. The car has the desirable overdrive and wire wheels that were options from the factory. Original factory black and factory heater options. Build on May 29,1959, imported by the USA dealer Cal Sales in San Francisco on June 9, 1959. A British Motor Heritage Trust Certificate is included with the car confirming factory options.

The car was imported from the USA to Denmark by the last Danish owner in 2006. The car was restored to the highest standard over a long time period, from 2009 to 2015, under the Danish owner's commission. Restoration included new paint, new interior, new brakes system, new starter, engine and transmission rebuilt, new manifold, new starter, new switches, new soft-top, new water and fuel pump, new tires and a new heater among other things—the total cost of restoration exceeding 30,000 Euros. Invoices for work done is included in the sale.

The car has been inspected and fully serviced and can be enjoyed as-is for many years to come. The car has Danish title and registration and is coming out of Danish ownership. The car passed Danish technical inspection (Syn/MOT/TUV) and will not have to passe inspection until April 2024.

One of the very best British roadsters we have seen in a long time, a very desirable and collectible car.

History of the 1955-1962 Triumph TR3:
The Triumph Motor Company launched the TR3 in October of 1955 as a successor to the TR2, and the new model was powered by the same 1991 cc, straight-4, overhead valve engine as its predecessor. The powerplant had larger carburetion; however, that pushed power to 95 hp, and the engine was mated to a four-speed transmission. New cylinder heads were fitted to the engine during the first 12 months of production, translating to 5 more hp, and top speeds for the TR3 approached 110 mph/180 kmh. The car utilized front independent suspension and a live rear axle and initially had drum brakes on all four wheels. However, within the first year, Triumph switched to front disc brakes, becoming the first production British car to do so.

Triumph executed a visual freshening in 1957, and the cars are now referred to as the TR3A, though the company never officially named this evolutionary model as such. Most significantly, the car’s grille grew wider and became less recessed. Also, headlight treatment was slightly altered, door handles (available on the earlier cars via a “GT Kit”) became standard, a locking trunk handle appeared, and larger bumpers were installed. Mechanically, most of the TR3’s original spec remained. The public responded favorably to the new appearance by purchasing more than 58,000 TR3As during the car’s six-year run.

The TR3 today is remembered as a model that helped establish Triumph as a leading producer of open two-seat sports cars – a reputation the company carried through the 1970s.