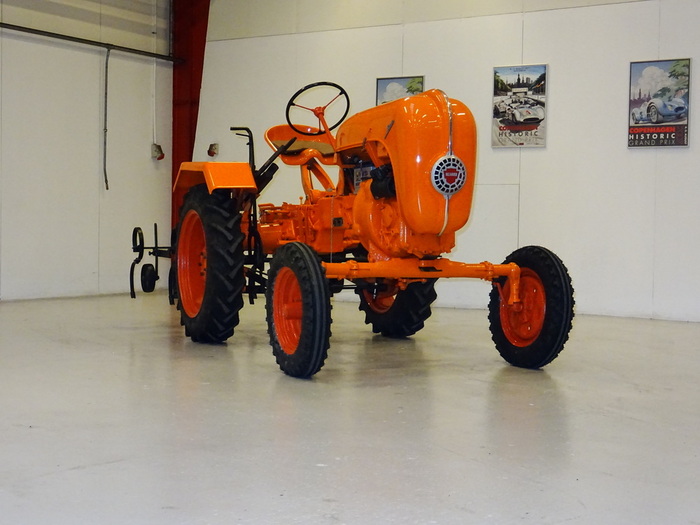 It was fully restored in January 2019. Present like new, both cosmetically and mechanically. It belongs in a museum and private collection.

In the year 1906, Allgaier Werke Gmbh was founded by Georg Allgaier in Hattenhofen near Göppingen producing simple cutting and punching tools. In 1918, the company went to Uhingen, five miles away. The first larger assignment of large-scale body panels went to France and Belgium in 1928. 1929 Allgaier started to produce press machines for the car industry. 1933-1945 the company produced plane parts and windmills, but also bombs. For many years, Ulrich W. Hütter was the chief of construction. A Soviet employee, Unter-lieutenant Stepan, was hanged on 27. October 1943 by the Gestapo. Georg Allgaier died in 1946. His heirs kept the company running, and this year, the company brought a first tractor, model R 18, on the market. In 1953 production of wind energy systems for a worldwide purpose was started. In 1955 production of motors and tractors was sold to Porsche-Diesel Motorenbau GmbH verkauft. Then the production of screening machines started and process technology. In the mid-'60s, the company had around 3000 employees. However, business with farming machines declined. The number of employees was less than 1000.

Prof. Dr. F. Porsche produced three prototype tractors in 1934, all equipped with gasoline engines. The Porsche diesel engine design with its unique air-cooled feature was just not quite ready for production at that time. Through numerous tests, this design let to a fully developed air-cooled diesel engine with a power range from 14 hp to 55 hp. By the early 1950s, Prof. Dr. F. Porsche had designed four basic models, one cyl., two cyl., three cyl., and four cyl., versions, all have individual and interchangeable cylinders and heads. Another interesting fact is that Prof. Dr. F. Porsche also had a 4-wheel drive tractor on the drawing board as early as 1946, ahead of everyone else.

After WWII, only companies in Germany who were producing farm tractors during and before WWII could continue producing those tractors. Since Porsche was not one of these companies but had a very modern and unique design, it signed licensing agreements with the German company Allgaier GmbH and the Austrian company Hofherr Schrantz. These two companies used the Porsche engine design and called their tractor: Allgaier – System Porsche and Hofherr Schrantz – System Porsche.