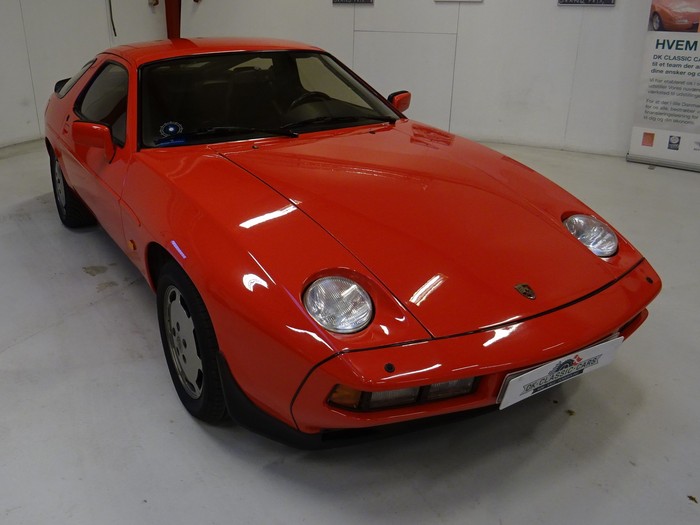 The car passed the Danish technical inspection (MOT/TUV) and will not have to pass inspection until 2027. The car is coming out of long-term Danish ownership and have Danish papers and title dating back to January 1978. The car is fully inspected and serviced and can be enjoyed as-is for many years to come.

The Porsche 928 was originally intended to replace the company's iconic 911 and the 928 combined the power, poise, and handling of a sports car with the refinement, comfort, and equipment of a luxury sedan. A significant car in Porsche history, the 928 has the distinction of being the company's first production V8 powered model and its only coupé powered by a front-mounted V8 engine.

The 928 debuted in March 1977 at the Geneva Auto Show. The 928 borrowed no parts from other Porsches, and its shape was like nothing else - a futuristic design with a low, wide stance, a long, sloping hood, a sharp nose, and an evenly rounded rump. "Telephone dial" wheels completed the package. At the time, design head Tony Lapine stated that "a car which is liked immediately will not hold up over time." Porsche had designed a long shelf life into its latest creation.

The body made use of collapsible polyurethane pieces over front and rear hidden bumpers, with aluminum doors, hood, and front fenders, and steel for the remaining panels. Though now commonplace, at the time, trying to coat such differing materials with a uniform paint job was a feat of ingenuity.

Beneath the handsome and complicated skin lay an advanced and well-balanced powertrain. A 90-degree, all-aluminum, 16-valve, 4.5-liter V8 with Bosch Continuous Injection System (CIS). It was mated to a fully synchronized rear transaxle with either a 5-speed manual or optional 3-speed automatic, and weight distribution was nearly perfect at 51%/49%, front to rear.

The suspension was fully independent all around, and Porsche worked hard to perfect the 928's rear suspension, which would allow it to accommodate over-aggressive drivers without the erratic tendencies of snap oversteer. The resulting "Weissach Axle" was an engineering breakthrough, a multi-link setup that made the 928 one of the best handlers in the world.