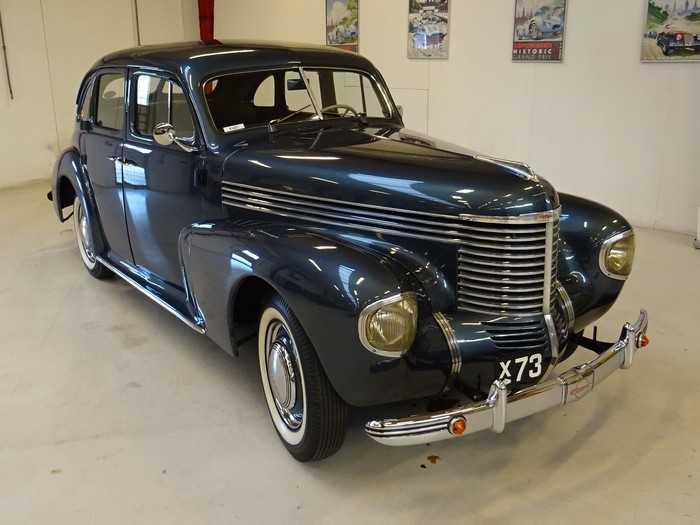 Original pre-war first-generation Opel Kapitän in desirable blue with only 32,873 kilometers in the odometer. The car retains its original 2.5-liter-inline six-cylinder engine and 3-speed manual transmission. Extensively documented owner history from new is included in the sale.

The car is in great mechanical and cosmetic condition and has been fully inspected and serviced, and is ready to be enjoyed as-is for many years to come. The car is coming out of long-term Danish ownership (12 years) and has a Danish title and papers dating back to new. The car passed Danish Technical Inspection (Syn/TUV/MOT) in March 2017 with 31,000 kilometers on the odometer and will not have to pass inspection until April 2025.

The car has a well-documented history from new: The car was purchased new from the Opel dealer Bulow in Aarhus on July 5, 1939, by the CEO of the Danish insurance company National, now Codan. The sales price was 7825 Danish Krone. When the war broke out the car was but in storage by the owner to avoid falling into the hands of the occupying forces.  The car was re-registered after the war in September 1945. After the original owner's death in 1973 the owner's nephew the car and restored the car back to “as-new-condition”. The car was later sold to a museum before being purchased by the last long-term Danish owner.

History of the first-generation Opel Kapitän:

The Opel Kapitän is an executive car made in several different generations by the German car manufacturer Opel from 1938 to 1970. The Kapitän was the last new Opel model to appear before the outbreak of the Second World War, developed during 1938 and launched in the spring of 1939 at the Geneva motor show.

Production began in November 1938. The first Kapitän was available in many different body styles, the most popular one being the 4-door saloon. 2-door coupé cabriolets were also built. The pre-war Kapitän featured a unitary body, an innovative feature for its time. The Kapitän inherited its 2.5-liter engine from its predecessor: in this application, a maximum speed of 118 km/h (73 mph) was reported. Civilian automobile production by Opel ceased in the Fall / Autumn of 1940.