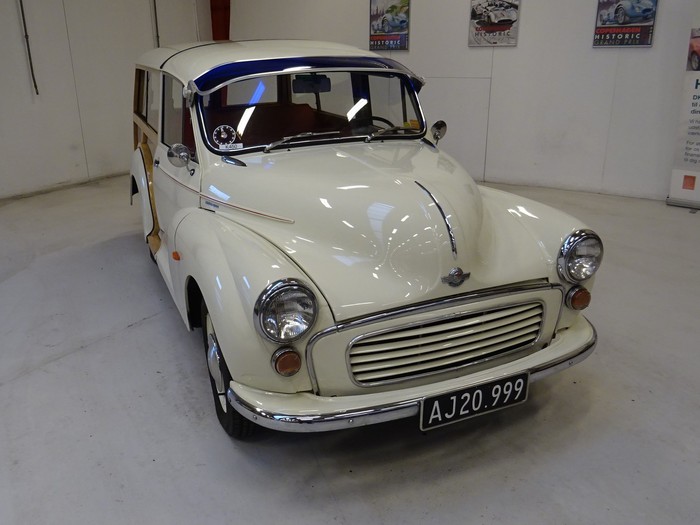 Excellent Morris Minor 1000 Traveller in white over the red leather interior. The car retains its original 1.1-liter four-cylinder engine making 48 brake horsepower from the factory and four-speed manual transmission. Only 75647 indicated kilometers on the odometer. A full inspection and service have been completed in-house, and the car is in excellent mechanical and cosmetic condition and can be enjoyed as-is for many years to come.

The vehicle has Danish papers and title dating back to 1967 and is coming out of long-term Danish ownership. The car passed the Danish technical inspection (Syn/MOT/TUV) in May 2018 with 73000 kilometers on the odometer and will not have to pass inspection until 2026.

Initially available as a two-door saloon and tourer (convertible), the range was expanded to include a four-door saloon in 1950, a wood-framed estate car (the Traveller) from October 1953, and a panel van and pick-up truck variants from May 1953. It was the first British car to sell over a million units and is considered a classic example of automotive design, as well as typifying "Englishness".

There is still an extensive parts backup for these cars, and parts are cheap.