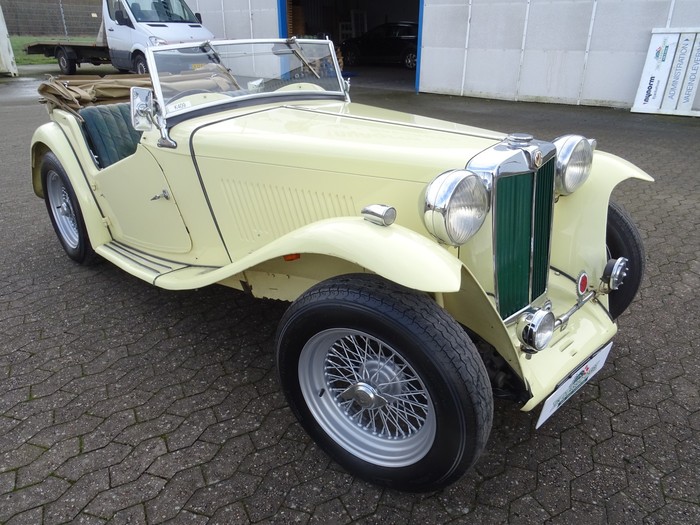 Beautiful MG TC in great original condition and in the desirable color combination of Sequoia Cream with Green leather interior. As all MG TC, the car is right-hand drive. The car has 14150 miles on the odometer and retains its original 4-cylinder 1.25-liter engine making 55 brake horsepower from the factory. The original factory 4-speed manual transmission with synchro at the top three gears propels the car to a top speed of 120 kilometers per hour. Original full weather protection as seen in the photos are included in the sale. The car has Danish papers and title and is coming out of 10 years of ownership. The car has no mechanical or cosmetic issues and can be driven and enjoyed as-is for many years to come.

It is uncommon to find an original unrestored MG TC in this good condition and the car has just the right amount of patina and this car promise to deliver a pure 1940s British driving experience.

History of the 1946-1950 MG TC:
The TC was the third T-Series variation, following the TA of 1936, and short-lived TB of 1939. The TC body was four inches wider than its predecessors, and it was faster than the TA and TB as well, but the car had the same fold-down windshield, flowing fenders, 19-inch wire wheels, slab gas tank, and rear-mounted spare. It was also only available in right-hand drive. The XPAG inline-four engine displaced 1,250 cc, and was upgraded with rubber mounts. The powerplant was able to push the TC to a top speed of about 75 mph, which was well suited for the car’s suspension and drum brakes.

In all, the MG TC offers a cheerful way to experience motoring as it was at the dawn of the post-war era. The T-Series MGs are fairly robust mechanically.