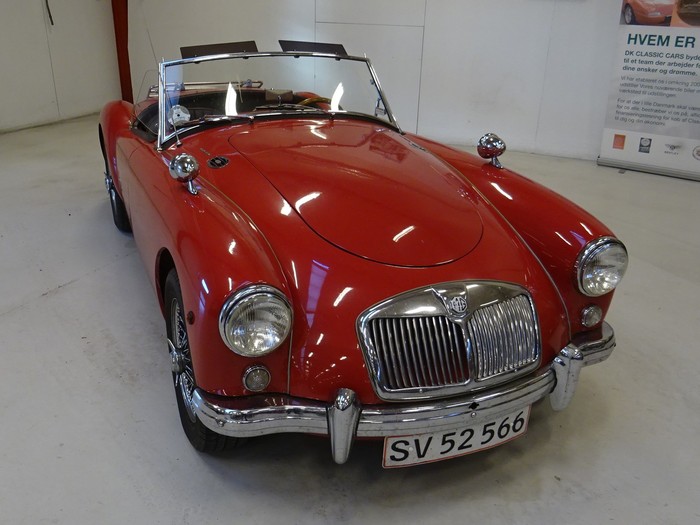 Wonderful late-production-year MGA Twin Cam in excellent mechanical and cosmetic condition, including original color and interior. The car is powered by a 1.8-liter B-series inline-four from an MGB 1800, making 95 brake horsepower from the factory and a four-speed manual transmission. Lockheed discs at the front and drum brakes at the rear from an MGA 1600 have been installed. The rev counter has been replaced to match the B-series engine.

Only 45227 indicated miles on the odometer. A restoration was commissioned in 2003, and only about 4000 kilometers were added since engine work was completed.

Originally sold and register in Hawaii, the car was imported to Denmark in 1998 by the long-term Danish owner. Only three previous owners from new. The vehicle has a Danish title, registration, and papers. The car passed a technical inspection (Syn/MOT/TUV) in 2015 with 38,000 miles on the odometer and will not have to pass a technical inspection until October 2023.

A full inspection and service have been completed in-house, and the car can be enjoyed as-is for many years to come.

Introduced for the 1956 model year, the MGA roadster replaced the aging T-Series cars. It was powered by a 68 horsepower 1,489cc overhead valve engine mated to a four-speed manual transmission, independent front suspension, rack-and-pinion steering, and a solid rear axle with leaf springs. Braking was by hydraulic drums at all corners.

MGAs are ideal first collector cars. They are affordable, simple to work on, rugged, and attractive. Parts are readily available and moderately priced.