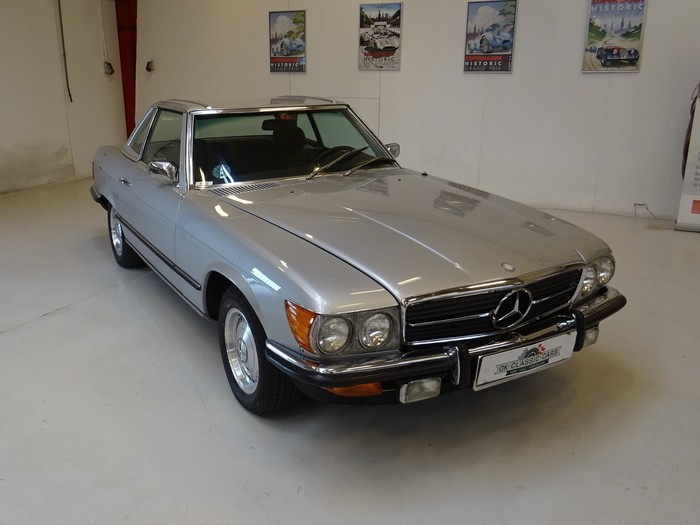 Desirable 4.5-liter V8 Mercedes-Benz 450SL with 129,499 miles and three-speed automatic transmission. New paint and extensive mechanical work completed in April 2021. 1973 was the first year of the 450SL. The car has the factory hardtop that is included in the price. The car will be delivered with a new Danish Technical Inspection (Syn/TUV/MOT). The car has Danish papers and registration and is coming out of long-term Danish ownership.

The Mercedes-Benz SL name has always signified a certain level of automotive style and sophistication, and each new generation seems both to define and be defined by its era. Such was the case when the R107 model SL came on the scene in 1972 as a replacement for the popular 230/250/280SL W113 series. The family of models existed with minimal changes until 1989, a remarkable production run for a luxury convertible.

With the R107, Mercedes debuted a V-8 engine in the convertible lineup, which was necessary given the new SL’s relative girthy 3,400-pound weight. Styling was typically conservative and somewhat reminiscent of the pagoda top cars, and despite dimensions, more or less the same, the R107 appeared to be much larger.

The first-year cars were dubbed 350SL in keeping with the model designation for Europe, despite actually carrying a 4.5-liter V-8 under the hood. The fuel-injected V-8 featured an overhead cam and delivered 230 horsepower. It was paired with a three-speed automatic, with no manual transmission on offer. The suspension was fully independent and four-wheel disc braking was standard.

For 1973, the car’s name was revised and 450SL would be the model designation moving forward. Also revised this year was the way in which horsepower was rated, and the new SAE net meant the 450SL’s power was listed at 190 hp. The following year, the 450SL grew large safety bumpers front and rear in keeping with federal regulations. In 1975, emissions requirements reduced output to 180 hp with the addition of a catalytic converter.

In 1976, the SL was fitted with a continuous fuel injection system, as well as transistorized ignition. Two years later, in 1978, Mercedes introduced automatic climate control and 14-inch aluminum wheels as standard equipment. The cars went unchanged in 1979, and in 1980, the fuel injection system was revised, further cutting power from 180 hp to 160 hp.

The 450SL model ended production with the 1980 model year, and its 380SL replacement would carry the torch into the 1980s. Before it was gone, however, the 450SL averaged about 6,000 units annually. When paired with their renowned reputation, they are easy to locate today and make for very comfortable top-down cruisers.