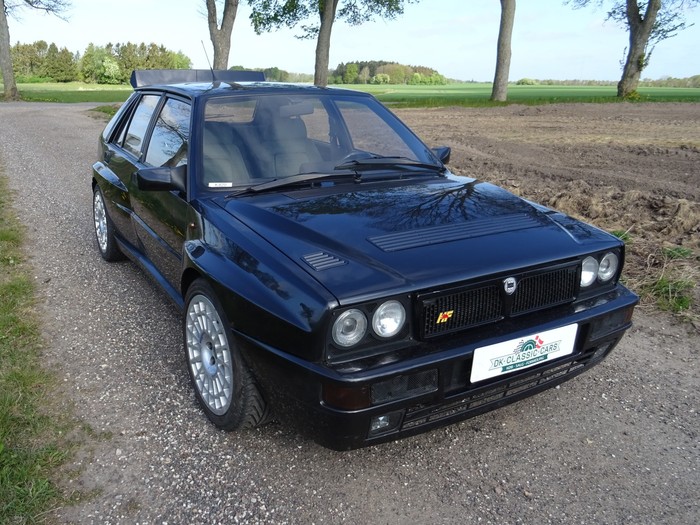 Wonderful original 1992 Lancia Delta HF Evoluzione I in black with gray cloth interior and only 84705 kilometers on the odometer. The car retains it's original 2-liter inline 4  making 210 hp and 5-speed manual transmission. The car is in great mechanical and cosmetic condition and has been fully inspected and serviced and is ready to be enjoyed as-is for many years to come. The car has a German title and papers dating back to April 21, 1992.

At the beginning of 1987, the World Rally Championship shifted to production-based Group A cars. Lancia responded by adapting the all-wheel-drive system from the preceding Group B S4 to the Delta HF. The resulting Delta HF 4WD/Integrale would go on to become the most successful rally car of all time, winning the World Rally Championship for six consecutive years, from 1987 through 1992.

The ultimate homologation version of the Integrale was the Evoluzione, built in 1991–1992 with a 16-valve engine producing 210 bhp in street tune. Although the Integrale would go on to win an astonishing sixth WRC championship in private hands, in 1992 Lancia retired from factory competition and commemorated its already-impressive five consecutive world championships with the first of a series of Special Edition Evo 1s.

Even a quarter-century after its production, the legendary Delta HF Integrale Evoluzione continues to set the standard for performance and road-handling. This is an amazing opportunity to acquire an Evo 1.