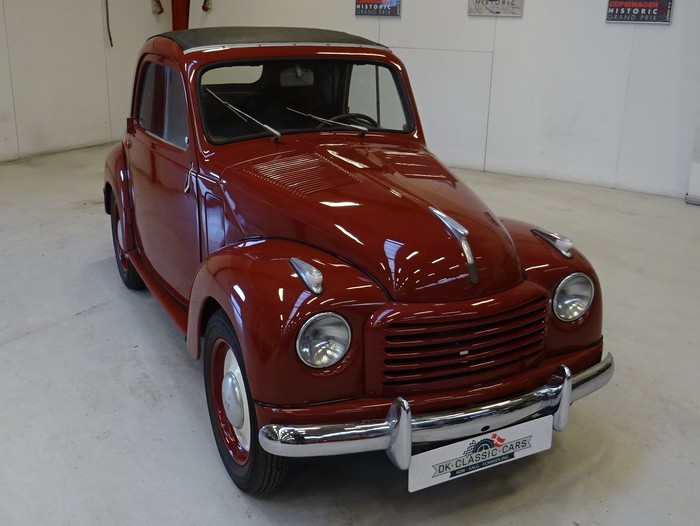 Wonderful late-model Fiat 500 C Topolino in excellent condition and only 99000 kilometers on the odometer. Coming out of long-term Danish collector ownership. The car retains its original 0.57-liter engine and 4-speed manual transmission. The vehicle has Danish papers and title dating back to new. The car passed the Danish technical inspection (Syn/MOT/TUV) and will not have to pass inspection until May 2024. In-house inspection and full service recently completed, and the vehicle is ready to be enjoyed as-is for many years to come.

History of the Fiat 500 Topolino:

The Fiat 500, commonly known as "Topolino," is an Italian city car produced and manufactured by Fiat from 1936 to 1955. The Topolino was one of the smallest cars in the world at the time of its production. Launched in 1936, three models were produced until 1955, all with only minor mechanical and cosmetic changes. It was equipped with a 569 cc four-cylinder, side-valve, water-cooled engine mounted in front of the front axle (later an overhead valve motor), and so was a full-scale car rather than a cyclecar.

The model C was introduced in 1949 with a restyled body and the same engine as Model B and was offered in 2-door saloon, 2-door convertible saloon, 3-door estate, and 2-door van versions. Model C was produced until 1955.