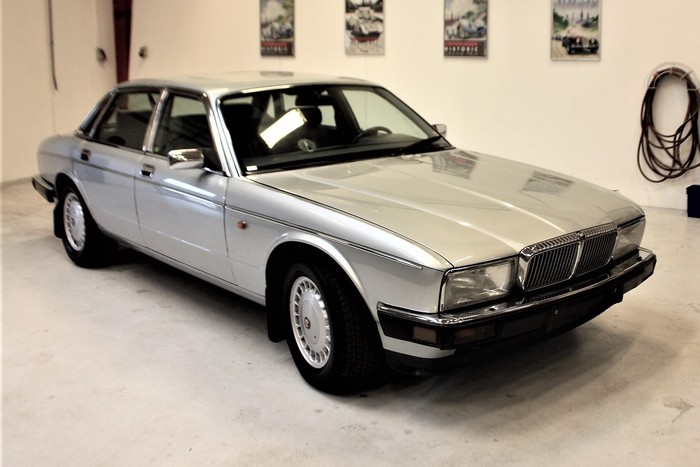 All original left-hand driver 1991 Daimler Six XJ40 4.0 with factory four-liter inline-6, 4-speed manual transmission, and 225000 kilometers on the odometer. The car has many desirable equipment features from the factory, including a sunroof, cruise control, leather seats, power-operated windows and seats, and air conditioning,

The car is coming out of long-term Danish ownership and has Danish papers and registration. A full inspection and service confirm that the car is in excellent mechanical and cosmetic condition and can be enjoyed as-is for many years to come.

The Jaguar XJ (XJ40) is a luxury sedan manufactured by Jaguar Cars between 1987 and 1994. Officially unveiled on 8 October 1986 it was an all-new redesign of the XJ to replace the Series III, although the two model ranges were sold concurrently until the Series III was discontinued in 1992. The XJ40 used the Jaguar independent rear suspension arrangement and featured a number of technological enhancements (such as electronic instrument clusters).

The 1993 XJ6 earned the title of "Safest Car in Britain" as the result of a government survey. When the XJ40 was discontinued in 1994, it was followed by the X300 platform XJ.

The Daimler-branded cars represented the highest trim level and were sold as their Vanden Plas model by Jaguar dealers in the United States. Like the Sovereign, it was fitted with single rectangular headlamps. Cosmetically, it differed from other models with its fluted radiator grille surround, boot-lid plinth, and detailed finishes. A Daimler interior features fold-out picnic tables for the rear passengers and a 2-passenger rear seat versus the 'flat', 3-passenger item on the Jaguars.