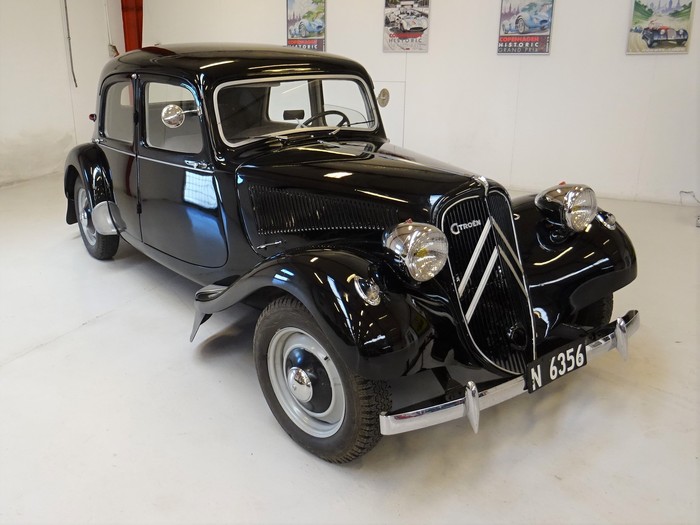 One of the last Citroën 11 BL Traction Avant produced with factory 1911cc “Perfo” engine producing 56 hp and a 115 km/h top speed. Being a 1953 model, the car inevitably comes in black as that was the only color offered. Despite having a very similar appearance to the pre-war models, it enjoys all the meticulous improvements of twenty years of production. It being an 11 BL model version, an evolution of the 11 Légère, in turn, derived from the 7 Sport, it has a short wheelbase which makes it lighter and a better performer.

The car was imported into Denmark in 2001 from the Netherlands with only 30,000 kilometers on the odometer. Well-documented history dating back to 1976 as well as service book is included in the sale  The car passed Danish Technical Inspection (Syn/TUV/MOT) and will not have to pass again until August 2025. Full service and inspection completed in-house and the car is ready to drive and can be enjoyed for years to come. The car has a Danish title and registration.

History of the Traction Avant:

The first Traction Avant was called the 7CV. It was short-lived and in 1934 the 7CV was replaced by the 7B and the engine was upgraded to 1529 cc. The model range expanded with the 7 Sport, with had better performance thanks to the introduction of the 1911 cc engine. Longer-wheelbase versions called model 11 were also launched. The basic version, later also referred to as 11A, was equipped with the 7 Sport engine and was later renamed the 11 Légère. In 1937 the 11 Normale was renamed 11B, while the 11 Legère was renamed 11BL. With the outbreak of the Second World War, production was reduced and then stopped. It was resumed in June 1945 but the availability of raw materials was scarce and some plants had suffered enormous damage. Updates began to slow down. Starting in 1948, the only color available became black over the entire range. On the 11B and 11BL versions, the only significant update was an increase in the compression ratio. In 1952, on the 11B and 11BL models, straight bumpers were introduced and, on all models, an oversized trunk and wipers hinged at the bottom. In May 1954 the brand new 11D engine was introduced, which foreshadowed the unit that would equip the DS. On 25 July 1957, the definitive release of production took place.