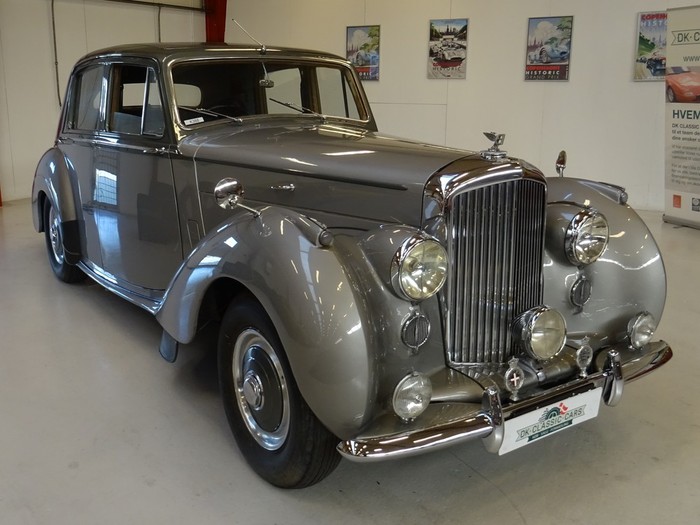 Wonderful right-hand drive first-year production Bentley R Type with only 46775 miles on the odometer. The car retains its factory original 4.6-liter straight-six engine making 130 brake horsepower from the factory coupled to the factory four-speed manual transmission. The R Type is the last Bentley offered with a manual transmission, making it significant and collectible.

The car's original tool kit is included in the sale. The car is coming out of long-term Danish ownership and has a Danish title and papers.

History of the Bentley R Type:

The Bentley R Type was the second series of post-war Bentley automobiles, replacing the Mark VI. Essentially a larger-boot version of the Mk VI, the R Type is regarded by some as a stop-gap before the introduction of the S series cars in 1955. As with its predecessor, a standard body was available as well as coachbuilt versions by firms including H. J. Mulliner & Co., Park Ward, Harold Radford, Freestone and Webb, Carrosserie Worblaufen and others. Other than the radiator grilles and the carburation there was little difference between the standard Bentley R Type and the Rolls-Royce Silver Dawn. The R Type was the more popular marque, with some 2323 units manufactured. All R Type models use an iron-block/aluminum-head straight-six engine fed by twin SU Type H6 carburetors. The basic engine displaced 4,566 cc (278.6 cu in) with a 92 mm (3.62 in) bore and 114.3 mm (4.50 in) stroke.  A four-speed manual transmission was standard with a four-speed automatic option becoming standard on later cars. It remains the last car by Bentley to be sold with a manual transmission.