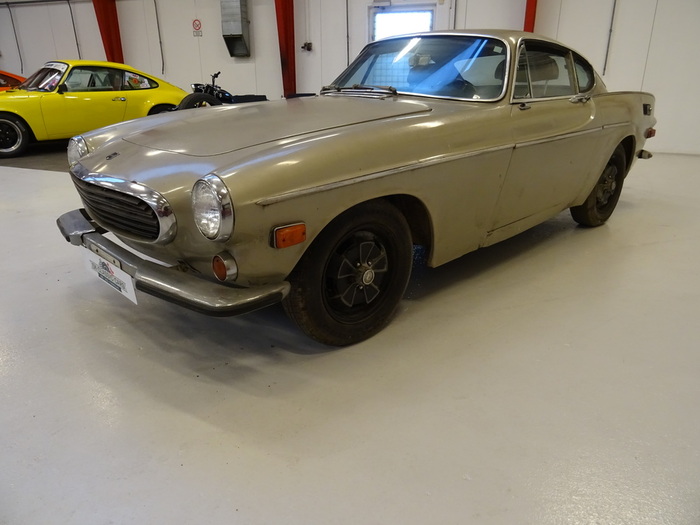 This 1971 Volvo P1800 E is in original mechanical and cosmetic condition. The car retains its original Volvo 4-cylinder Bosch D-Jetronic fuel-injected 2.0-liter B20F engine making 130hp as well as its original 4-speed manual transmission. The car will need significant restoration and attention before it is ready for the road after coming out of long-term storage. The car has a clear and free California, USA title, and a close inspection shows no evidence of the car ever being in an accident.

The design of the car was until very recently attributed to Frua of Italy, but in reality, it was a family affair, done primarily by a then-young Pelle Pettersen the son of 544 designer Helmer Pettersen. The car at least looked Italian, very much a product of the 1950s rather than the 1960s with neat tail fins and a short greenhouse with a tall beltline. Early cars were assembled by Jensen in West Bromwich, England.

The quality of the Jensen-built cars was, however, not up to Volvo’s standards (and the cars were notoriously rust-prone) so production was shifted to Volvo’s Gothenburg plant in Sweden in 1963 and the model name transitioned from P1800 to 1800S. A few years later, in 1969, the original 1.8-liter B18 engine was replaced with the 2.0-liter B20 for an added 18 hp. Both engines came with dual, English-made SU carburetors. In 1970, the 1800E came with a host of changes including a new instrument panel.

The price is for the car restored. Delivery time for the restored car is about 3-4 months. Please look at a similar Volvo 1800 we restored for a client by clicking the following link: https://www.dkclassiccars.dk/product/volvo-p1800-jensen--352

This car will be restored to the same high standard.