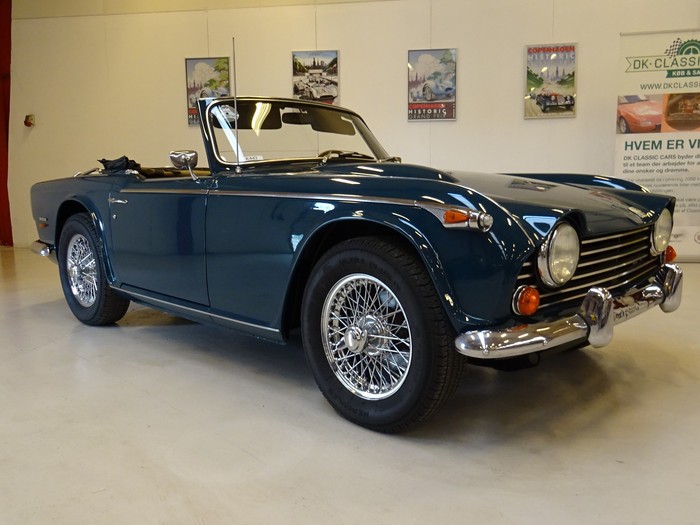 1968 Triumph TR250 in desirable Valencia Blue with Black leather interior. The car has a factory 2.5-liter inline-six with carburetors and a 4-speed manual transmission. The vehicle underwent a full restoration in August 2021. A British Motor Industry Trust Heritage Trust Certifauce included in the sale confirms factory color and options, assemble /shipping dates, and the Los Angeles dealer's name taking delivery of the car. Two engines (TR6 engine number CF21355VF and TR250 matching numbers CD/404-E) and the original wheels are included in the price.

Full service and inspection just completed. The car is coming out of 16 years' long-term Danish ownership.

History of the 1967-1968 Triumph TR250:
The Triumph TR250 was an update of the TR4A, which added an independent rear suspension option to the original TR4. The TR250 bodywork remained the same, with only minor differences to the grille.

With the new 2.5-liter six-cylinder engine derived from the Triumph 2000 sedan, the TR250 carried lean-running twin Zenith-Stromberg carburetors. The car had a four-speed transmission with optional overdrive and a lower rear axle ratio to take advantage of the six-cylinder engine’s torque. The suspension was an independent coil spring all around, with wishbones up front and trailing arms in the rear. The brakes were Girling discs upfront with drum rears. Steering was by rack-and-pinion.

While strictly an intermediate model, as the TR6 came along in late 1968, the TR250 is quite distinctive and can be easily tuned to be a respectable performer.

The car is fully restored to factory specifications.