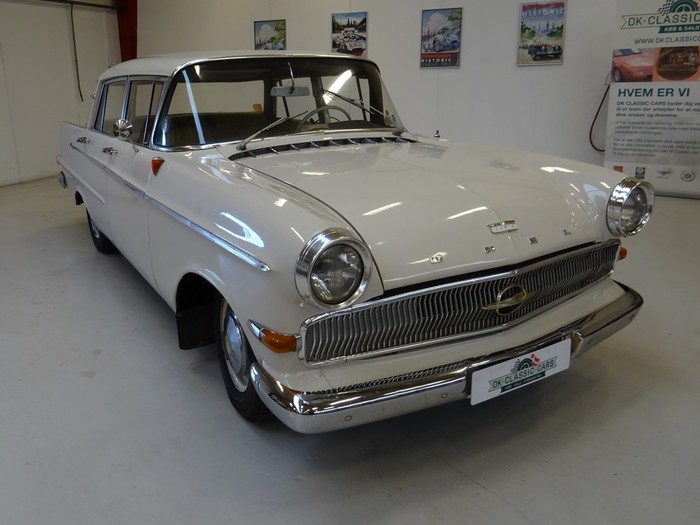 Original 1961 Opel Kapitän P2 in desirable color combination and only 52,512 kilometers in the odometer. The car retains its original 2.6-liter-inline six-cylinder engine and 3-speed manual transmission. The car is in good mechanical condition and can be driver as-is for many years to come. The car is coming out of long-term Danish ownership and has a Danish title and papers.

History of the Opel Kapitän P2:

The Opel Kapitän P2 came to market in August 1959 and while it still had the panoramic windscreen, it gained a new grille and a redone body with a more angular roof and a new rear. It was driven by a stronger new, over square 2.6-liter inline-six still of OHV and pushrod design. Carried over were the 3-speed and 4-speed overdrive transmission; the latter was replaced from December 1960 by a version of GM´s 3-speed Turbo-Hydramatic automatic. The P2 climbed to a top speed of 150 km/h (93.2 mph), reached 100 km/h (62 mph) in 16 seconds and consumed 12 L/100 km. From August 1959 to December 1963, Opel built 145,618 units of this Kapitän series. No other Opel Kapitän model, before or subsequently, achieved such a high production level. The large Opel’s were never dominating players in their market segment on the same scale as the smaller Rekord and Kadett models, possibly due to the strength of Mercedes-Benz in the big car sector. Nevertheless, the highpoint for the big Opel’s was 1960 when together the Kapitän and Admiral were Europe's top-selling six-cylinder saloons, with nearly 48,000 sold.