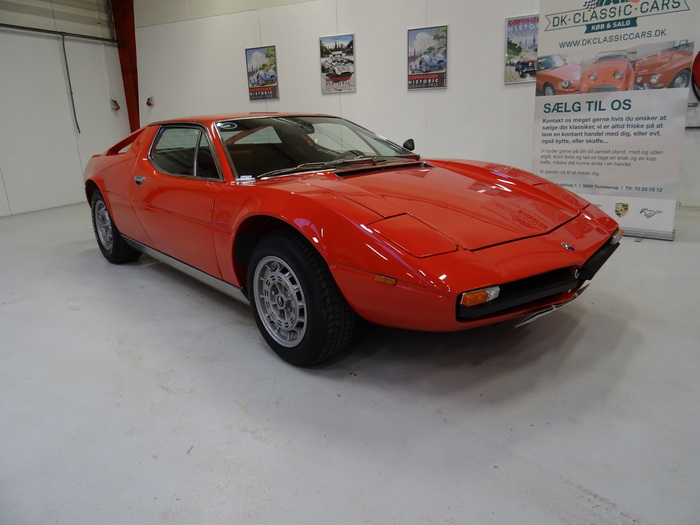 Stunning Maserati in great mechanical and cosmetic condition. The car has a very decidable red over the black interior color combination—one of only 1,830 ever made between 1975 and 1983.

The car is coming out of long-term Danish ownership since 1983 (36 years with the previous owner). The previous owner acquired the vehicle in Sweden and spend approximately 34000 Euros restoring the car, including rust repair, new paint, and suspension. The vehicle has not been driven much since the restoration commissioned shortly after the previous owner's purchase. The car has a Danish title.

Thoroughly an amazing Italian sports car that can be enjoyed every day.

History of the Maserati Merak:

The Maserati Merak (Tipo AM122) is a mid-engine 2+2 sports car produced by Maserati between 1972 and 1983. The Merak was closely related to the Maserati Bora, sharing part of its structure and body panels, but was powered by a 3.0 L V6 in place of the latter's 4.7 L V8. The extra cabin space gained by fitting a smaller and compact powertrain was used to carve out the second row of seats - suitable for children or petite adults - making the Merak not just a less expensive alternative to the Bora but also a more practical 2+2.

The Merak used a steel monocoque construction paired to a rear tubular subframe supporting the powertrain and rear suspension. This was of unequal length A-arms type all around, with coaxial coil springs and telescopic shock absorbers. The braking system consisted of discs on both axles, the front ones vented. A single-plate dry clutch to a 5-speed, all-synchromesh transaxle gearbox, and a limited-slip differential was fitted.

The car is sold on consignment - motivated seller accepting offers