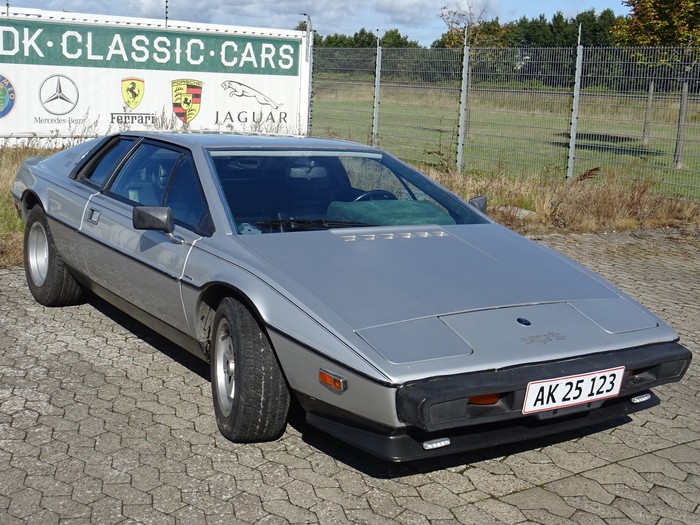 Wonderful 1978 Lotus Esprit S2 in silver metallic and original green velour/leather interior and only 23362 miles on the odometer. The car retains its original 2-liter engine and 5-speed manual transmission. Original from California the car had one owner before being imported to Denmark. Recent work includes a new timing belt and new brakes. The car is in great mechanical and cosmetic condition and a full inspection and service assure that the car can be enjoyed as-is for many years to come. The car passed Danish technical inspection (MOT/TUV) in May 2020 and will not have to passe inspection until 2028. The car is coming out of long-term Danish ownership and have Danish papers and title.

History of the 1976-1986 Lotus Esprit:
By the early 1970s, both the Elan and the Europa had been on the market for more than five years and both had been sold in kit form. A new model was needed to change Lotus’ image. Enter the 1976 Lotus Esprit. The new Lotus wore sharp wedge styling courtesy of Giorgetto Giugiaro and looked just like the stunning 1972 concept car. Engineers mounted the 2.0-liter, 4-cylinder engine mid-ship, and coupled it to a 5-speed transmission. The Giugiaro Esprit continued until a redesigned model was introduced in 1987. The early cars, however, remain one of the purest expressions of the 1970s wedge theme. And while the Lotus Esprit can certainly be classified as an exotic, parts and maintenance are nowhere near Ferrari levels. As such, this car remains a popular vintage option.