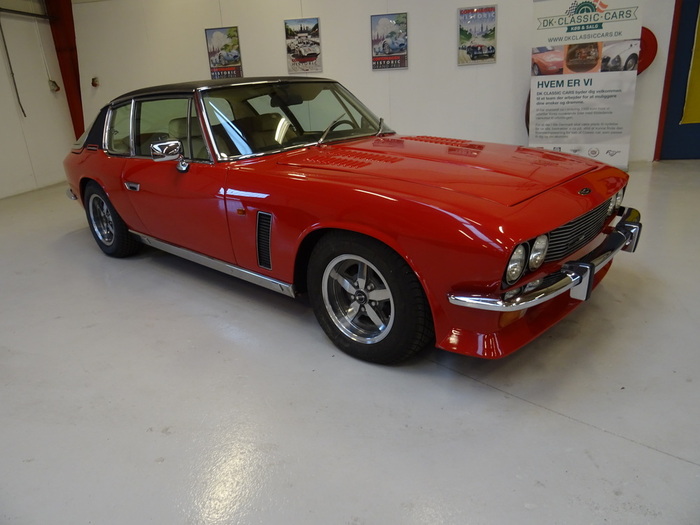 Wonderful 1974 Jensen Interceptor Mark III Series 4 Sports Saloon, one of only 527 built for the North American market. All Jensen Interceptors were The car was hand-built at the Kelvin Way Factory in West Bromwich, near Birmingham England in March 1974, only 5 months after the Series 4 world debut at Earls Court. The car has the matching numbers factory 7.2-liter V8 engine making approximately 330 brake horsepower. Leather upholstery and reclining front seats are standard features on this Mark III Series 4. The car was originally sold and title in California and made its way to Denmark in 1987 and was later sold to the last owner in 1992. The car underwent a restoration in 1993-1994 and again in 1997 and 2004 commissioned by the previous owner.

History of the Jensen Interceptor:

The Jensen Interceptor is a Grand touring car which was hand-built at the Kelvin Way Factory in West Bromwich, near Birmingham in England, by Jensen Motors between 1966 and 1976. The body was designed by an outside firm, Carrozzeria Touring of Italy, rather than the in-house staff. The early bodies were built in Italy by Vignale, before Jensen took production in-house, making some subtle body modifications.

Jensen Motors used Chrysler V8 engines for the Interceptor, starting with the 6.2-liter with optional manual (Mark I, only 22 built) or TorqueFlite automatic transmissions driving the rear wheels through a limited-slip differential in a conventional Salisbury rear axle. Jensen chose to use the 7.2-liter Chrysler V8 engine for 1971 until end of production in 1976.

The Mark III, introduced in 1971, revised the front grille, headlamp finishers, and bumper treatment again. It had GKN alloy wheels and air conditioning as standard, and revised seats.