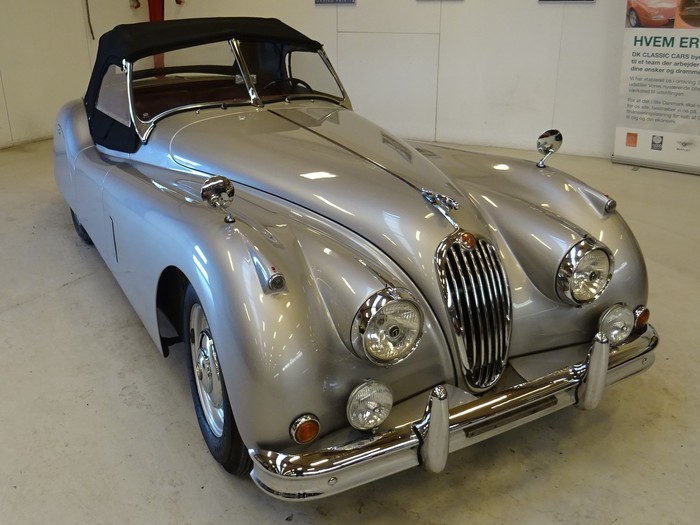 Original matching numbers Jaguar XK140 SE Open Two Seater in silver over a red leather interior and only 28520 indicated miles on the odometer. The car retains its original 3.4-liter double-overhead-camshaft six-cylinder engine making 210 brake horsepower and four-speed manual transmission. This is the SE model, the top-of-the-line model also known as the MC model in the US.

The car is coming out of long-term Danish ownership. A full inspection and service confirm that the vehicle is in excellent mechanical and cosmetic condition and can be enjoyed as-is for many years to come.

When the XK140 took over as Jaguar’s flagship sports car in 1954, it had a severe challenge, following in the tracks of the spectacular XK120. While the weight went up slightly, so did the power of the 3.4-liter, twin-cam six, which was up to 190 horsepower in standard trim. As a result, performance remained on a par with its predecessor. The uprated engine was mated to the same four-speed manual unit used in the XK120.

The gearboxes used in all Jaguars up until 1965 were originally designed and built by Moss Gear of Birmingham for Standard, though beginning in 1948 the actual assembly work was gradually taken on by Jaguar, and the Moss Gear Co. seems to have disappeared by the late 1950s. The prefix S is believed to indicate assembly by Moss, prefix J for assembly by Jaguar.

Three bodies were offered: the open two-seater, a drophead, and a fixed head with 2+2 seating. In 1955, a three-speed automatic became optional on the drophead and fixed head coupe. There was a further model proliferation in that each of the three body styles was offered in three versions: the standard car, the M version with dual exhaust, wire wheels, and fog lamps, and the MC, which received all the M equipment as well as the cylinder head from the competition C-Type. The top of the line MC (known in the UK as SE) was rated at 210 bhp.

Although the bare chassis remained unchanged, the most significant difference was that the XK140 was fitted with a rack and pinion steering, which substantially improved handling. When production ceased in 1957, a total of 8,884 XK140 had been built, 3356 Open Two Seaters, and the model had been successful at retaining Jaguar’s sports car sales.