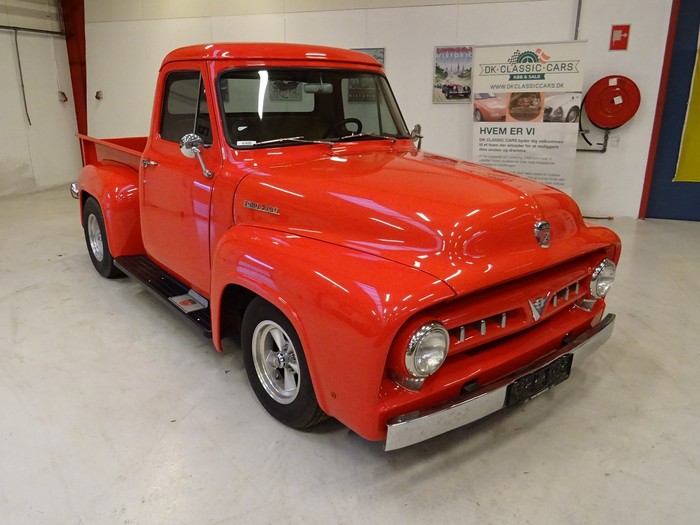 Fantastic first model-year of the second-generation Ford F100 ½ ton pickup truck. The truck is in great mechanical and cosmetic condition. The truck has been restored, and many new parts have been installed, including a new 4.9-liter V8 engine making 290 brake horsepower, automatic gearbox, air-condition, radio installed in the glovebox, disc brakes, tilting steering wheel,  tinted windows, wider wheels, and many other upgrades that make the truck more enjoyable and usable to own and drive.

The truck starts, drives, and stops as it should, and a full inspection and service assure that the truck can be enjoyed as-is for many years to come.

The truck is coming out of Danish ownership. The truck has a California title and has not been registered in Denmark. European Union import duties have been paid.

The second generation of the Ford F-Series is a series of trucks that was produced by Ford from the 1953 to 1956 model years. In line with the previous generation, the F-Series encompassed a wide range of vehicles, ranging from light-duty pickup trucks to heavy-duty commercial vehicles.

A lot of design money was spent on the 1953 F-100's “Driver Engineered” cab, which was created using the “Measuring Man,” a life-size model of Average Joe Trucker. “Driverized” features like improved control locations, sound deadener in the doors, and an even wider seat guaranteed that Joe and his buddies would feel right at home. Also new was an enlarged one-piece windshield for added visibility.

To further emphasize the model update, Ford changed the F-Series model nomenclature from a single number to three numbers; subsequently, this system has remained in use on all Ford F-Series trucks to the present day.