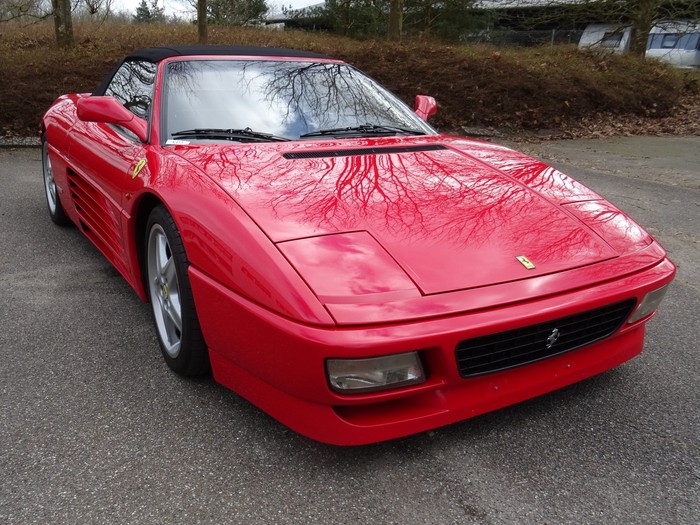 Wonderful original late-production model 1994 Ferrari 348 Spider with only 068978 kilometers on the odometer. The car retains its original 3.4-liter V8 engine making 319 horsepower and 5-speed manual transmission. This is car number 14426 in the production line. The timing belt was replaced at 58000 kilometers. Original wheels and exhaust included in the sale. The car is in excellent mechanical and cosmetic condition and can be enjoyed as-is for many years to come. The car has a Danish title and papers.

The car's mid-engine arrangement mimicked the layout of Ferrari’s F1 cars at the time and the 3.4-liter four-cam V-8 made propelled the car to 100 km/h in 5.6 seconds on the way to a top speed of 275 km/h while standard anti-lock brakes afforded equally impressive stopping abilities.

Ferrari introduced the 348 in 1989 as a long-awaited successor to the 308/328 series, which had been in production since 1976. A dramatic departure from its predecessor, the 348 took styling cues from the Testarossa, with its side-mounted radiators and strakes, while having a longitudinally-mounted engine with a transverse gearbox. This mid-engine arrangement mimicked the layout of Ferrari’s F1 cars at the time and looked like a “T” in plan form.

In late 1993, the 348 was revised, featuring subtle styling changes and more power. The 348 Spider (convertible) variant was also introduced, in-line with the phasing out of the Mondial Cabriolet. 1,090 units of the Spider were produced.