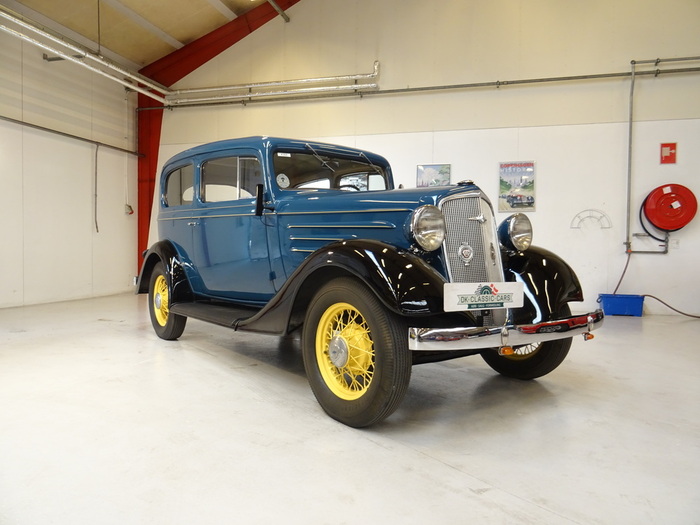 Absolutely gorgeous original first-model year Chevrolet Standard Six in great mechanical and cosmetic condition. Full frame-off restoration commissioned by the previous Danish owner. The car retains its original 3-liter six-cylinder valve-in-head engine producing 60 bhp. Full service and inspection completed in-house and the car is ready to drive and be enjoyed for years. The car has a Danish title and registration.

The Chevrolet Standard Six (Series DC) was launched in 1933, initially as the Chevrolet Mercury, by Chevrolet as a lower priced alternative to the 1932 Chevrolet Series BA Confederate. It was advertised as the cheapest six-cylinder enclosed car on the market at the time.

The Standard was offered in three body styles all on a 107-inch wheelbase: coach, coupe and coupe with rumble seat. All bodies were by Fisher and featured 'no-draft ventilation'. All models were powered by a 181 cu in (2,970 cc) six-cylinder valve-in-head engine producing 60 bhp (45 kW; 61 PS) at 3,000 rpm and 125 lb-ft (169 Nm) of torque. This engine had first appeared in a Chevrolet in 1928. The car had full instrumentation. A clock, heater, and radio were options.