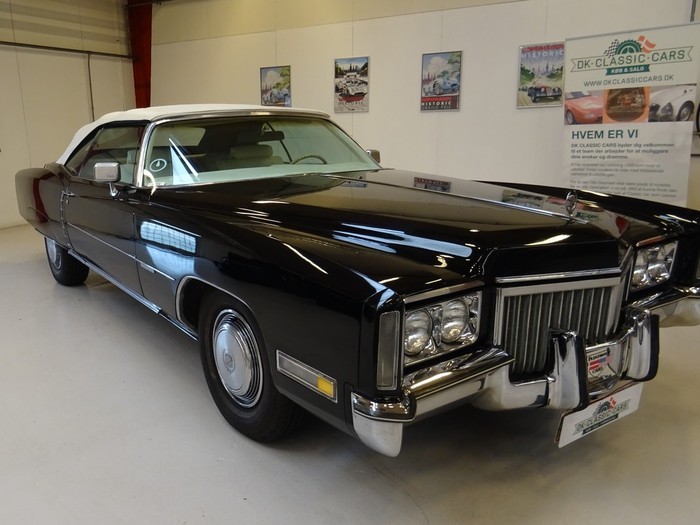 Wonderful 1972 Cadillac Eldorado Cabriolet with only 54514 miles on the odometer. The car retains its original 8.2-liter engine and 3-speed automatic transmission. 1972 model year was the last year of the Fleetwood designation for the Cadillac Eldorado and as such the car has the attractive interior by Fleetwood and body by Fisher as evidence by the date plate. The car is in great mechanical and cosmetic condition and can be enjoyed as-is for many years to come. The car has a Danish title and papers and is coming out of long-term Danish ownership.

History of the Cadillac Eldorado:

The 1971 Eldorado was substantially redesigned, growing two inches in length, six in wheelbase and featuring standard fender skirts, all of which gave the car a much heavier appearance than the previous year. An Eldorado convertible model was available for the first time since 1966. Door glass remained frameless, and the hardtop rear quarter windows were deleted, replaced by a fixed "opera window" in the widened "C" pillar. Inside, there was a new curved instrument panel and redesigned seat configurations. A fiber-optic "lamp monitor" system, which displayed the functionality of the headlamps, parking lamps, taillamps, brake lights and turn signals was mounted on each front fender and the shelf below the rear window.