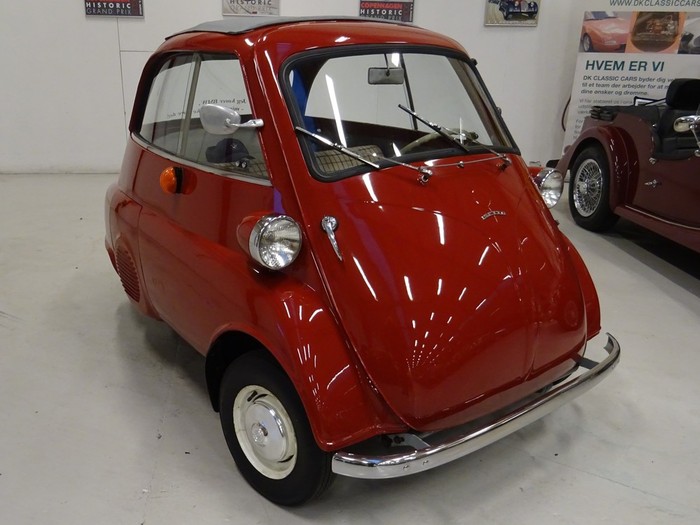 Wonderful restored 1961 BMW Isetta 300 with only 33984 miles on the odometer. The car retains its original 0.3-liter engine making 13 brake horsepower and a 4-speed manual with reverse transmission. The car is in excellent mechanically and cosmetically condition and has just completed and full service and inspection and can be enjoyed as-is for many years to come. The car has only had three previous owners. The first owner had the car for 25 years and it is clear that the car has been enthusiast-owned throughout its entire life. The car has a Danish title and registration dating back to March 10, 1961.

History of the BMW Isetta 300:

In 1956, the government of the Federal Republic of Germany changed the regulations for motor vehicles. Class IV licenses issued from that time onward could only be used to operate small motorcycles and could no longer be used to operate motor vehicles with a capacity of less than 250 cc. At the same time, the maximum capacity allowed for the Isetta's tax category was 300 cc. Class IV licenses issued before the change in the regulations were grandfathered and allowed to be used as before.

This change in regulations encouraged BMW to revise their Isetta microcars. In February 1956 a 300cc engine was introduced. The engineers enlarged the single cylinder to a 72 mm bore and 73 mm stroke, which gave a displacement of exactly 298 cc; at the same time, they raised the compression ratio from 6.8 to 7.0:1. As a result, the engine power output rose to 10 kW (13 hp) at 5200 rpm, and the torque rose to 18.4 N⋅m at 4600 rpm. The maximum speed remained at 85 km/h (53 mph), yet there was a marked increase in flexibility, chiefly noticeable on gradients.