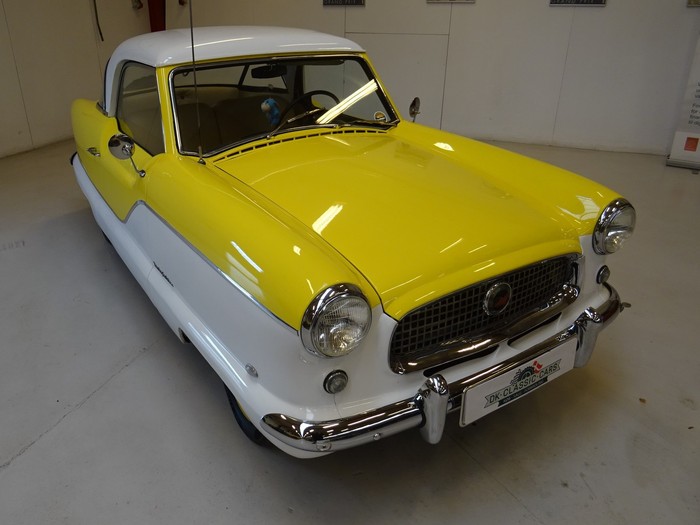 Wonderful Series III Austin Nash metropolitan in factory Sunburst Yellow and contrasting Snowberry White. The car retains its original 1.5-liter engine and three-speed manual transmission. The car only has 62,000 indicated kilometers on the odometer. Full service and inspection have been performed and the car is in great mechanic and cosmetic condition. A car that can be enjoyed as-is for years to come. The car has a Danish title and papers and is coming out on Danish ownership.

November 1955 saw the start of Metropolitan Series III (NK3) production (Commencing with VIN E21008 on 28 November 1955). A redesign at this time saw the Metropolitan's B-Series engine increased in capacity to 1,498 cc (as used in the Austin A50 Cambridge). Polished stainless steel sweep-spears on the body sides allowed a new two-tone finish to be incorporated, which had the cosmetic effect of lowering, slimming, and lengthening the car. The new exterior colors were P905 "Caribbean Green", P910 "Sunburst Yellow", and P911 "Coral Red" with P909 "Snowberry White" as a contrast. The grille was also redesigned, and the hood had its non-functional hood scoop removed. American Motors changed the designation to "Metropolitan 1500" to differentiate it from the earlier 1,200 cc models. The interior was also changed to incorporate a "houndstooth" check material for the seats trimmed with white vinyl. The dashboard was also now painted black, rather than the body color as was the case for Series I and II Metropolitans.